In 1972 Jonathan and Phoebe Wheeler and their three children moved from the city to Co. Wicklow for a quieter simpler life.  They began to grow vegetables and started an organic market garden then moved on to rearing organic beef and lamb and in 1984 they bought the 50 acre farm in Ballinanty.  At that time the Organic food sector had not fully developed and so Jonathan began to diversify.  Meanwhile Jonathan’s son Will had a hobby of collecting antique bottles and this grew into a collection of traditional farming implements.  In their spare time they roamed the countryside gathering the lost and forgotten memorabilia of a farming life which was slowly but surely fading into the past as modern farming became more highly mechanised and intensified.

The story goes that young Will’s bedroom was so packed full of bottles and old farming paraphenalia that his mum Phoebe could not actually get INTO the bedroom and insisted that Will and Jonathan sort out a separate space for the stuff.  Initially they housed the collection in a garden shed but Jonathan had now the nugget of an idea for building a dedicated museum and then in 1988 he also planted a hedge maze as an added attraction.  It took nearly 10 years to bring the seed of an idea to fruition and it changed organically as they went along, just like any farmer growing a new crop.  The renovation of the old farm house and the building of the traditional tea rooms and large farm barn museum were all completed by 1996 when the farm was opened to the public for the first time.  Most of the buildings were built by the father and son team, using many recycled materials, wood and locally sourced products and labour.  The farm is lucky to be situated in an area of unspoilt beauty which has never been farmed intensively and so is rich in nature and wild-life.  Jonathan and Will share a love of trees and planted many varieties all over the farm.  They have created wild nature walks, ponds, reclaimed land, raised walkways and from a windswept tree-less hill side they have cultivated the farm carefully and tenderly, as sympathetic to the land as possible, developing the wonderful spaces which we all enjoy today.

In July 2018, Jonathan sadly passed away.  He will always be remembered and honoured as the person who planted a maze in the Wicklow hills and tried to conserve a picture of a traditional way of life on a rural hill farm.

Will has three children of his own now and along with his wife Anita they continue to create new and fun attractions on the farm. 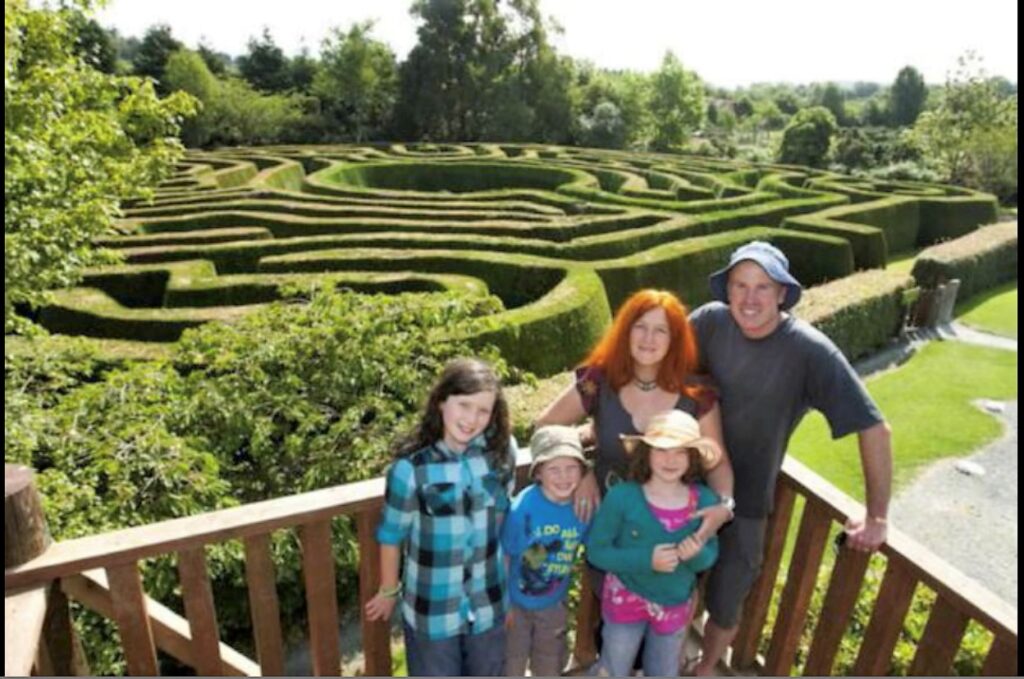 It has been a bit of a rocky few years. Jonathan Wheeler who planted our original hedge Maze, sadly passed away in 2018. Soon after his death, the hedge maze which was 34 years old, caught a pathogen called Phytophthora Lateralis. Over the last few years, the pathogen spread through the hedges and the Maze also died in 2021. After a battle all Winter 2021 to remove the old hedging, Jonathan’s son Will and his son Naoise replanted a new Maze in Spring 2022!

“Although it was a bit of a shock to lose the old Maze, it did enable us to make some big nature friendly improvements. The next generation Maze is planted with locally grown broadleaf beech trees from Aughrim.

1500 trees and a lot of hard graft! For the new fencing we also kept it local and used Larch fence posts from nearby Annamoe”.  Jonathan’s grandson Naoise helped his Dad Will plant the new maze just like Will did originally with his Dad, the youngsters in the Wheeler family are helping to continue the tradition.

We have also joined up with the All-Ireland Pollinator Plan and designed a new Nature Treasure Hunt which will lead your kids on an amazing adventure around the whole farm. Crack the clues and solve the nature puzzles to find the treasure!

And the story will continue…..if you have any suggestions or ideas please do contact us by emailing contact@greenanmaze.com and we would love to hear your feedback!